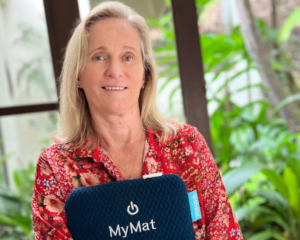 Behind every amazing technological device there is always a great story and when technology is designed with the purpose of benefiting the quality of life of humans and animals, the story deserves to be told.

Renata Beffa is the founder of Healing House Costa Rica and creator of the MyMat® PEMF device. To understand how she came to develop this portable, easy-to-use device that can be used in any place in the world, it is necessary to understand the events that shaped Renata’s personal life. In an innovative way, Renata successfully expressed her outlook on life, her desire to positively impact people’s physical, mental and spiritual health, by creating a device that would benefit humanity.

For those who know little about pulsed electromagnetic fields (PEMF); Pulsed electromagnetic frequency technology, such as that used in the MyMat®, was developed to restore astronauts’ health after space travel. Thanks to this technology, astronauts’ body cells were able to return to their natural state of health after returning from outer space. Today it is also used during space travel to keep astronauts healthy. These frequencies, energy waves, work with the body’s natural magnetic field to enhance cellular self-healing. Since magnetic fields contribute to the increase of electrolytes and ions, they naturally influence the electrical changes and metabolism of the cell.

You can learn more about PEMF here. MyMat® puts the body in a state of coherent resonance with its original healthy frequency. This activates self-healing.

Renata Beffa was born on a small farm in a village in the Swiss Alps. She remembers her childhood as being deeply connected to nature, spending hours contemplating the leaves moving in the trees, the wind forming shapes in the clouds, the water whispering as it flowed down the mountain creeks … She spent a lot of time hiding in nature and when coming home, her mother would say “running away from work again” and of course, at that time as it was unusual to say that someone was meditating, which would be the best way to explain what her daughter was doing.

At the age of 19, after graduating, she got her first job at a hotel reception and this is where her destiny began to take shape. Her first day at work coincided with the beginning of workshops on holistic healing that were given in the same hotel. They were facilitated by great teachers from different parts of the world, covering topics related to archetypes, Bach flowers, essential oils, mandalas, astrology, aromatherapy, family constellations, Reiki and much more. Renata, with her great thirst to learn, immersed herself in these workshops and then started dating the organizer.

At the beginning, this relationship was extremely productive and by joining energies over the years, they organized many workshops. Together with Astrodata they organized the first world congress on astrology at the Kongresshaus in Zurich. After this event they were going to make a trip together to the USA to get married and continue with this type of activities, but Renata listened to her intuition that told her that she was not ready for that and decided to make the trip alone.

She felt that this world of holistic workshops and being surrounded by people twice her age or older, seeking to heal big wounds from their past, was not the place for her at this time. She had a very pleasant childhood, simple and close to nature, and she felt that she still had no problems that needed healing.

Upon arriving in the United States, she signed up for a group tour with Trekamerica and travelled to most of the states. This helped her to get to know the country well and to choose where she wanted to move to and live for a while. After several weeks traveling the South, she arrived in Los Angeles, California. Some members left and others joined the group, including an Italian naval officer with whom she fell in love, later becoming her husband and father of her three children. They lived first in Switzerland and then in Italy.

Life presented them with a health situation that no doctor in Europe could or wanted to solve, and they found a specialist in Mexico who offered them help.

Renata says that they were extremely well received in Mexico, with a lot of love and empathy, for the situation they were facing. They were dazzled by the friendly nature of Latin Americans and it was here that they decided as a family to stay and live in Latin America, choosing Costa Rica as their next home.

Upon arriving in Costa Rica in 1993, they opened an antique gallery with a piano bar with live music, something innovative for Costa Rica at that time. However, Renata wanted something more and tried to open a sector for Bach flowers and essential oils in the same gallery, but it was not the right time, people were not yet ready for this. So, she continued with her holistic healing studies to find out more about ways to help people dealing with their struggles and health issues in life.

Renata invited healers and specialists from different disciplines to Costa Rica and traveled to other countries such as Peru and Bolivia meeting shamans, she was in Colombia to the Sierra Nevada with the Mamos where she learned a lot about energies, filaments and fine frequencies.

Renata continued to have a deep desire to learn something new and innovative, that would help people who could not travel to have access to these healers. It was in 1999 when she came across a portable frequency device, called Meridian, which could measure how the body’s meridians were functioning and with the same device, with electro acupuncture, help the body to find its own balance again.  She imagined carrying this device to the different remote places where there was no possibility of seeing doctors and thus helping many people.

After some time, a dear friend of Renata gave her another, more advanced and easier-to-use device called QX (QUANTUM). “When I receive something, I like to give something in return” and with this principal Renata decided to give her first Meridian device to Cuban doctors for use in public hospitals in Cuba. Renata studied how to use this new QX device to the fullest potential. As she delved deeper into this world of frequencies, she learned about other devices that use coherent frequencies that promote self-healing.

However, it was very difficult to afford these devices at that time as the prices ranged from $10,000 to $25,000. “Something must be done to help families preventing diseases and help them to recuperate their health faster”, Renata thought. She found some scientists, doctors and engineers that helped her put together a PEMF device that was affordable, portable and easy to use by anyone. With a lot of research and hard work, in 2010, they were able to create MicroMat.

She still had more obstacles to overcome. In order to produce the device and distribute it to many people required a large economic investment that Renata could not afford at that time. This is where once again destiny was shaped in her favour. Renata had just received a generous gift from her father, a large, very nice vehicle, that’s how she describes it. Without thinking twice, she sold it. The day after the car was sold, a friend called saying he was going back to England with his family and asked if he could leave his two cars at her house. This is how magical the universe is – when something is done to help with a lot of faith, it always comes back and most of the times more abundant.

With the sale of her car, she managed to produce the MicroMat prototypes that years later and with many additional improvements, became MyMat.

Renata’s life has been a path built by small actions that have led her to innovate and to help people to connect with their inner peace and as such start their self-healing. There are many positive testimonials on the effects of using MyMat PEMF. Read more about MyMat here